Built in 1871, the Royal Albert Hall hosts a range of events, including everything from classical and folk to rock, pop, ballet, opera. 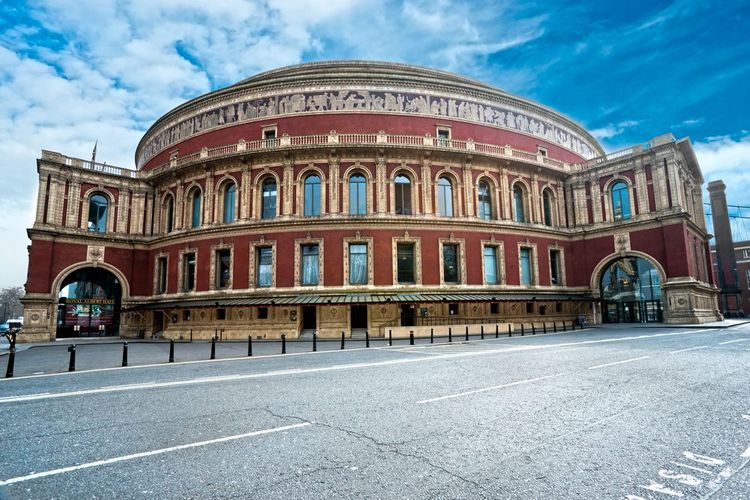 The Royal Albert Hall is much more than just a concert hall. It was Prince Albert’s cherished idea, and after he died unexpectedly and far too young, Queen Victoria carried the project on in his memory. The official opening ceremony took place in March 1871, and Edward, the Prince of Wales, gave the speech as Queen Victoria was, apparently, too overcome with emotion to speak.

The hall seats an impressive 5,267 people and since its official opening in 1871 has hosted many of the world’s finest musicians and bands as well as being home to The Proms, which have been held there every summer since 1941. The main hall at the Royal Albert Hall puts on almost 400 performances annually, everything from classical and folk to rock, pop, ballet, opera, and movies accompanied by live orchestras, sporting events, awards ceremonies and more. And that’s not all, 400 or so more events take place each year in other areas of the building.

You’ll find the Royal Albert Hall in South Kensington, a magnificent place and a highly unusual design. These days the venue is a registered charity held in trust for the nation. If you have a concert or other event in mind, maybe you’d like to stay somewhere close by? We have easyHotel Victoria, easyHotel Kensington and easyHotel Paddington to choose from.

‘This Hall was erected for the advancement of the Arts & Sciences and works of industry of all nations in fulfilment of the intention of Albert Prince Consort. The site was purchased with the proceeds of the Great Exhibition of the year MDCCCLI. The first stone of the Hall was laid by Her Majesty Queen Victoria on the twentieth day of May MDCCCLXVII and it was opened by her Majesty the twenty-ninth of March in the year MDCCCLXXI. Thine O Lord is the greatness and the power and the glory and the victory and the majesty for all that is in the heaven and in the earth is thine. The wise and their works are in the hand of God. Glory be to God on high and on Earth peace.’

There are exhibitions throughout the year, and they are free for people who have tickets for a performance. They’re also free on the venue’s many Open Days, the dates for which you’ll find on the Royal Albert Hall website.

Tours of the Royal Albert Hall

You can take a one-hour behind-the-scenes tour of the Hall including the awesome auditorium itself. You’ll see the Gallery, with its remarkable views of the stage, plus the Royal Retiring Room, a luxurious place of gorgeous Victorian furniture and royal portraits. The Queen’s private suite and box is yours to explore, the place the Royals sit when they’re at the Hall, and of course the Grade 1 listed dome. Just bear in mind it’s best to pre-book tours at busy times to avoid disappointment on the day. It costs £13.75 per adult, £6.75 per child aged 6-16, £11.75 for concessions – the over 60s and students with a valid ID – and tours are free for children aged under 6.

Events at the Royal Albert Hall

The venue’s most famous annual event is The BBC Proms. It takes place in July-August every year and lasts for eight weeks. There are classical music concerts and other events held every day during the Proms, and the Last Night at the Proms is probably the most popular of all. Aside from that, the venue hosts a massive array of different performances throughout the year, of every imaginable kind.

The Hall tours take place every day except Wednesdays and run between 10:30 and 3.30. The times vary, so check the website for details. It’s open late into the night for concerts and events, but only to those with tickets.

Where to eat Near the Royal Albert Hall

There are some superb restaurants near Royal Albert Hall, whether you’re looking for something cheap and cheerful or a bit smarter. Try Coda by Eric Chavot at the Royal Albert Hall for beautiful Italian food. Berry Brothers & Rudd on Kensington Gore is a brilliant bar with comfy sofas to relax in, serving cocktails and platters of food, and Cacciari’s Restaurant at 82 Old Brompton Road is another fab Italian treat. Or choose Salut! In Islington for modern European cuisine – head for 412 Essex Road.

How to get to the Royal Albert Hall

Walking – How to get to Royal Albert Hall on foot? The prettiest, most scenic approach on foot is through Hyde Park, studded with pathways and providing beautiful views of the building as you approach.

Underground – Knightsbridge and High Street Kensington tube stations are your nearest, roughly a ten-minute walk away, and there are more tube stations not much farther away including South Kensington, Gloucester Road, Lancaster Gate, Queensway, and Bayswater. They’re all an attractive walk from the venue.

Train – Victoria and Paddington are your closest national railway stations, both a half hour walk away with great bus and tube links.

Bicycle – There are a number of Santander Cycles docking stations in close walking distance, including on Kensington Gore outside the Royal College of Art.