Nothing could be more quintessentially English than the city of Oxford. Known as The City of Dreaming Spires for its striking medieval architecture, world-famous university and ancient pubs dating as far back as the 13th century, this English gem makes for a perfect weekend escape. 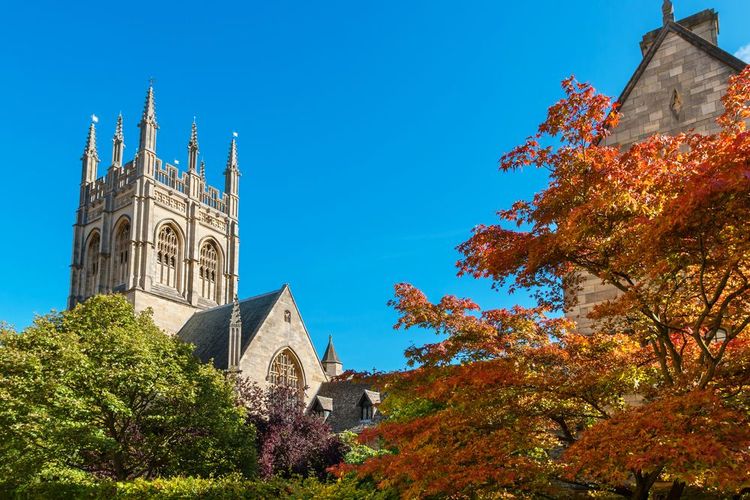 If you’re looking for places to visit in Oxford, you will not need to worry about a lack of choice. That’s why we’ve done the hard work for you in our rundown of the top 10 things to do in Oxford.

1. Marvel at the Architecture in Radcliffe Square

Walk in the footsteps of scholars on a visit to the University of Oxford, known for being one of the UK’s oldest and most famous universities. There are many walking tours of the campus and its historic interiors to be explored.

The quaint and cobbled pavements of Radcliffe Square and the classic architecture of its surrounding buildings – including the Radcliffe Camera, are amongst some of Oxford’s most iconic locations. The square sits at the heart of the university and is named after Dr John Radcliffe after he donated a large sum of money towards it.

Another iconic building to visit close to the university is The University Church of St Mary the Virgin. The church is considered one of the oldest university buildings and offers incredible panoramic views of the city. Visitors can go up the tower at St Mary’s, the oldest part of the church itself.

For fans of the Harry Potter franchise, Christ Church College is a must-see when visiting Oxford, as the college was a key filming location for the films. The Bodley Staircase features in the first film, Harry Potter and the Philosopher’s Stone; the Cloisters also feature, and the college’s Great Hall served as the inspiration for Hogwarts’ famous dining hall (though scenes weren’t filmed there).

To be in with a chance of exploring the famous halls of this iconic building, visitors should book online in advance. Please note that the college closes to the public at 5pm each day.

3. Explore the Botanic Gardens and Arboretum

Oxford’s scenic charm also extends to its green spaces with a wide variety of nature spots to enjoy. A great place to start when visiting Oxford is the Oxford Botanic Gardens and Arboretum. The garden has been around for over 400 years, making it the UK’s oldest botanic garden. The garden is open daily to the public between 10am – 4pm (though this will vary according to the season) and is home to over 6,000 plant species, 7 glasshouses and a walled garden that can be explored.

A short drive away from the garden is also the Harcourt Arboretum, spanning over 130 acres with its native woodland and meadows. Perfect for lovers of nature!

Just outside of the city centre you will find Blenheim Palace. This UNESCO World Heritage site was the birthplace of Winston Churchill and is known for its grand baroque architecture. History enthusiasts will be able to explore the decadent State Rooms, with the option to listen to an audio tour from experts on the history of the interiors or stroll through the landscaped formal gardens. To get to the palace from the city centre, visitors can travel by public transport. The S3 bus goes from the city centre to Blenheim Palace, with the journey taking approximately 50 minutes. By car, the journey takes an estimated 35 minutes.

5. Rent a Punt and Cruise the City’s Waterways

Embark on a punting trip - one of Oxford's oldest traditions (it's even traditional for Oxford university students to go punting on graduation day!) and explore the scenic city by river. With plenty of local businesses available for punt hire that can be booked in advance, you'll be spoilt for choice if you're looking to take the scenic route.

6. See Some Real Treasures at the Ashmolean Museum

From Egyptian mummies to Japanese art, The Ashmolean Museum's worldly collections are a must-see when visiting the city. As Britain's oldest public museum, it houses objects dating from 8000 BC to the present day. Their collections also include works by Pablo Picasso, Leonardo da Vinci and Paul Cézanne. Add the museum to your list of free things to do in Oxford, but as a top tip, make sure to keep an eye on their website for the latest ticketed exhibitions and opening times.

7. Take a Stroll Through Port Meadow

North of the city is one of Oxford's largest open spaces edged by the River Thames. This calming spot is home to grazing cattle and horses and is primarily used by locals as a key picnicking spot in the summer. Port Meadow is also close to Jericho; a bohemian neighbourhood that's home to many independent bars, traditional pubs and boutique shops. Make a day of it and wander past the neighbourhood's colourful terraced houses before stopping for a bite to eat at one of the areas trendy restaurants.

8. Catch Some Live Music or Comedy at The Bullingdon

After a day of exploring, head over to The Bullingdon for a night of spectacular live music and comedy. This independent bar is popular for its all-week-long events and themed nights which are regularly updated and listed on their website.

Visit Oxford's first and oldest distillery with behind-the-scenes access to their process of distilling the whisky, gin and vodka sold on-site. Visitors can book a distillery tour direct on their website to discover more about how they grow their grains and produce their spirits. If visiting in the summer, visitors can sample and enjoy a drink at the distillery's very own garden bar.

As highlighted earlier, Oxford's rich and diverse literary heritage is one that the city is proud of. From Alice's Adventures in Wonderland and beyond, every corner of Oxford has inspired many authors, past and present (an ornate wooden alleyway door that runs down the side of St. Mary’s Church, was the inspiration behind the wardrobe door leading to Narnia in C.S. Lewis’ The Chronicles of Narnia!).

Fans of literature can explore this further with a visit to The Story Museum which celebrates just that - stories! Visitors can discover more through the museum's year-round exhibitions and workshops.

J.R.R. Tolkien and C.S. Lewis are also both buried in cemeteries just outside of Oxford city centre. J.R.R. Tolkien’s grave can be found in Wolvercote Cemetery, north of the city; C.S. Lewis is buried in the cemetery at the Holy Trinity Church in Headington Quarry, to the east.

The city of Oxford's history, striking architecture and green spaces leaves plenty of room for things to do and discover. Make the most of a trip to this iconic English city with an affordable stay at the brand-new easyHotel Oxford.

From £33.99 / night
subscribe to our newsletter
The Beatles Liverpool Guide