Your Guide to Shopping in London

Like all the world's greatest capitals, shopping in London is something special. The city contains some of the biggest national branches of the brands we love, iconic department stores and more quirky shops, too.

If you’re looking for fun things to do in London at night, you’re spoilt for choice; the capital is chock-full of legendary bars, clubs, and entertainment venues that stay open well into the early hours. Discover the best nightlife in London with our guide. 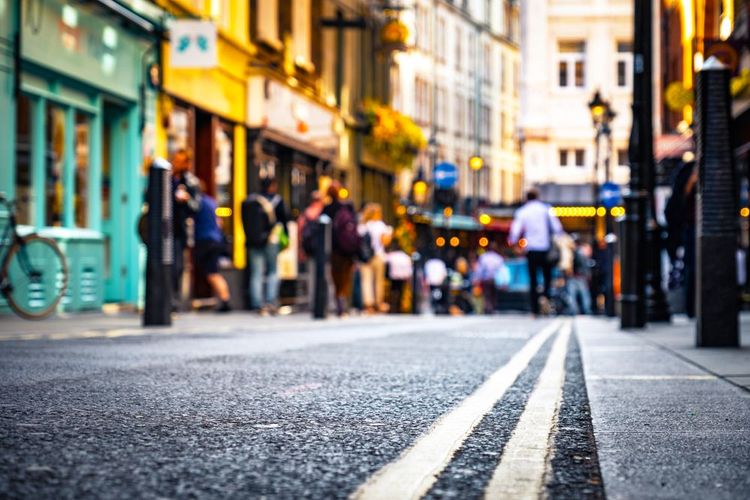 London is famous for its vibrant nightlife; with its eclectic mix of bars, clubs and entertainment venues, there’s plenty to experience after hours in the capital. Here’s our guide to some of the best-loved and most popular places to go in London at night.

The Best Nightlife Areas in London

From Camden’s vibrant music scene to Clapham’s indie bars and clubs, London is packed full of hotspots to enjoy when the city comes to life at night.

You can’t talk about nightlife in London without mentioning Soho. This legendary location is slap-bang in the centre of the city, and offers some of the best entertainment in the capital all in one small area. Expect a truly eclectic mix of bars, restaurants, and clubs here, and make a night of it. Head for Dean Street, Old Compton Street, Frith Street and Beak Street to discover 24/7 activity.

Part of Camden’s charm is its colourful and eccentric atmosphere; unlike any other area that you will come across in London. Visit at night to experience the best of its lively music scene (especially if you’re looking to catch any up-and-coming artists!), or grab a drink at one of its many local pubs, like the Hawley Arms.

Shoreditch is well-known for its hipster haunts and buzzing nightlife. From warehouse raves to trendy bars, head to the coolest part of East London for a memorable experience. Grab your mates and visit Queen of Hoxton for its rooftop bar and basement club, or for a night of glamour and mayhem, stop by Trapeze Bar for their famous 90s vs 00s club nights.

South of the capital you’ll also find many popular bars, pubs and clubs that celebrate a mixture of cultures and music from different corners of the world. Notable places to visit include Hootananny, and for a touch of Southern soul music and food, Blues Kitchen in Brixton.  Clapham Grand is also a great venue that’s not to be missed if you’re in the Clapham area.

It’s no secret that London is home to a whole host of amazing bars and pubs. In fact, you’ll find somewhere great to drink wherever you’re staying.

If you’re in East London, head to the Victorian Bath House in Bishopsgate. Packed with period luxury, this unique venue offers plenty of delicious goodies to eat and drink. Enjoy amazing cocktails and excellent cuisine from top chefs. Alternatively, there’s Oriole Bar in Smithfield Market. This luxurious, speakeasy style bar has an extensive drinks menu, offering cocktails from all over the globe. The food here is equally just as eclectic, and there’s a live music schedule to enjoy too; expect everything from Cuban Son music to African blues.

Tucked away discreetly in a corner of Covent Garden, the Lamb and Flag is a great example of a classic London pub. It’s a cosy spot that’s loved by locals and tourists alike.

The Mayflower, a gastropub by the Thames, offers incredible views out over the river. It’s located on Rotherhithe Street, just a 2-minute walk from Rotherhithe station. There’s a restaurant upstairs serving traditional British fare, and a seating area outside that’s the perfect place to sit back and relax during the warmer months.

If you’re out West but still want a river view, check out The Dove in Hammersmith. The site dates back to the 17th century; King Charles II used to dine here with his mistress Nell Gwynne. Pub is a record-breaker too, featuring the world’s smallest bar room!

The coolest clubs in London

Famed for its nightlife, London does not disappoint in its variety of VIP clubs, stylish bars and downtown raves. Whether you’re looking to sip on champagne cocktails in a chic setting or go all-out on a themed night out, in the city that never sleeps, there’s something for everyone.

London is home to some of the most famous nightclubs, drawing attention from all corners of the globe. Make sure to visit some of the hottest venues when you’re next in the capital.

The Ministry of Sound is one of the world’s best-known club venues. First opening its doors in September 1991, the venue quickly became an epicentre for the house music scene. Today, it remains one of the country’s best-loved dance music venues, hosting sets from some of the world’s most notable DJs.

Fabric is another popular London club. opened in October 1999, several years after The Ministry and right in the middle of the dance music revolution. Head for the old Metropolitan Cold Stores, where you’ll find three rooms – each with its own independent sound system. The famous vibrating ‘bodysonic’ dancefloor has to be experienced to be believed. It’s incredible.

Printworks London is a cavernous South London venue that’s become one of the city’s most popular clubbing destinations since opening in 2017. Spanning a range of music genres from EDM to house, this Surrey Quays club is the place to be for an electric night out in the city.

If you’re staying at easyHotel London City Shoreditch then a visit to the nearby XOYO nightclub is a must for DJ club nights that will be your soundtrack to the weekend.

London is all about diversity and does not fall short on offering some memorable LGBTQ+ club nights. Get ready to celebrate the rainbow social scene in style.

Head East for a night at the historic Bethnal Green Working Men’s Club, featuring live music and drag performances, as well as a whole host of different themed club nights.

London is home to some of the greatest musicians in the world, and it comes as no surprise that the city is also known for its live music venues.

The O2 Academy Brixton has been around a long time. Originally called ‘The Academy,’ it’s been an established live venue since 1983Some of the best British punk and rock bands have performed here, and today it’s still considered one of London’s leading music venues, nightclubs, and theatres.

There are many more great music venues in London, including the SSE Wembley Arena, Alexandra Palace, and The Victoria in Dalston. The Macbeth on Hoxton Street is another great live venue in the heart of East London.

If jazz is your thing, you’ve got to stop off at the legendary Ronnie Scott’s Jazz Club on Frith Street in Soho. Alternatively, there’s the Cafe Oto on Kingsland High Street or The Luna Lounge in Leytonstone.

For a night of laughs, make the most of London’s infectious comedy scene. The city sets the stage for the best in British comedy, with areas such as Leicester Square serving as the hub for all things funny.

Showcasing new and upcoming talent, The 99 Club in Leicester Square hosts live comedy every night of the week. It’s been awarded ‘Best London Comedy Club’ by Chortle multiple times over the years, so it’s a must-visit for fans of stand-up.

The Top Secret Comedy Club on Drury Lane is a no-frills basement bar offering dazzlingly good stand-up comedy every night of the week. Tickets are always reasonably priced too; on Wednesdays, entry is just £1!

The Comedy Store is one of the oldest and best-loved comedy clubs in the capital, dating back to 1979. Located in the heart of Soho, expect to see familiar faces and newcomers alike when you visit.

Getting Around London at Night

To make the most of a good night out in London, take advantage of the capital’s iconic transportation system.

The easiest way to get around the capital after dark is by hopping on the Night Tube, which runs a 24-hour service on Friday and Saturday nights. You’ll find late-night trains on the Central, Jubilee, Northern, Piccadilly and Victoria lines; services also run on parts of the London Overground East London line. During the week, trains generally run between 5am and midnight, but it’s always worth checking ahead to plan your journey.

Experiencing the best nightlife in the country starts with a night out in the capital. Book a comfy stay at our London hotels at the heart of the city to be close to the action.

From £38.99 / night
subscribe to our newsletter
Best Free Museums in London