With over 3000 shows to choose from across 100 venues and with a variety of theatre, comedy and street performers on offer, Edinburgh Fringe Festival can be quite a feat to navigate. By reading our ultimate guide to Edinburgh Festival, you'll be able to plan the ultimate trip and watch the must-see shows! 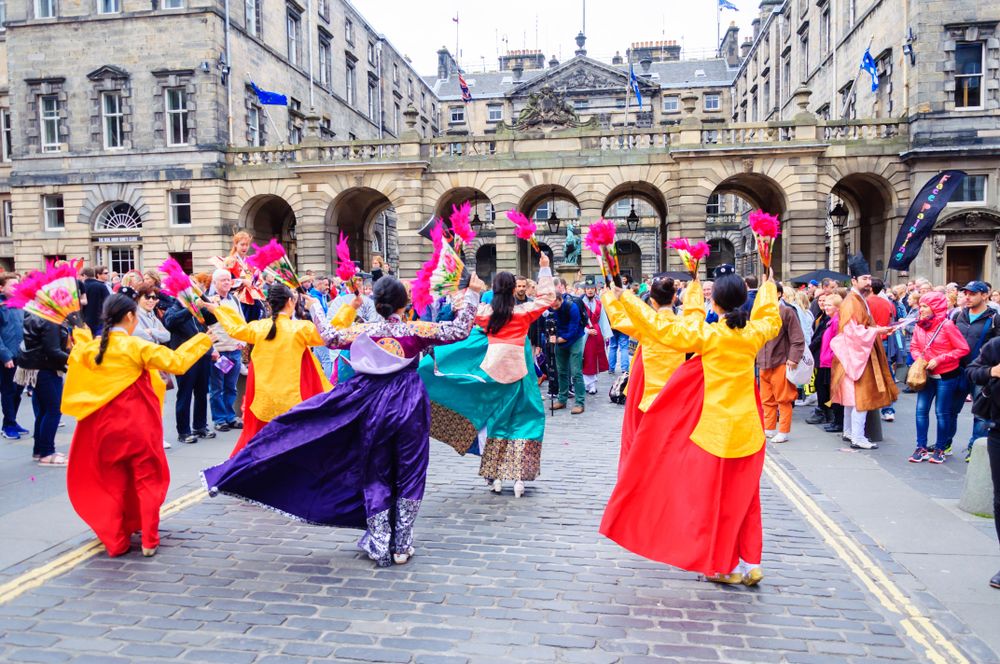 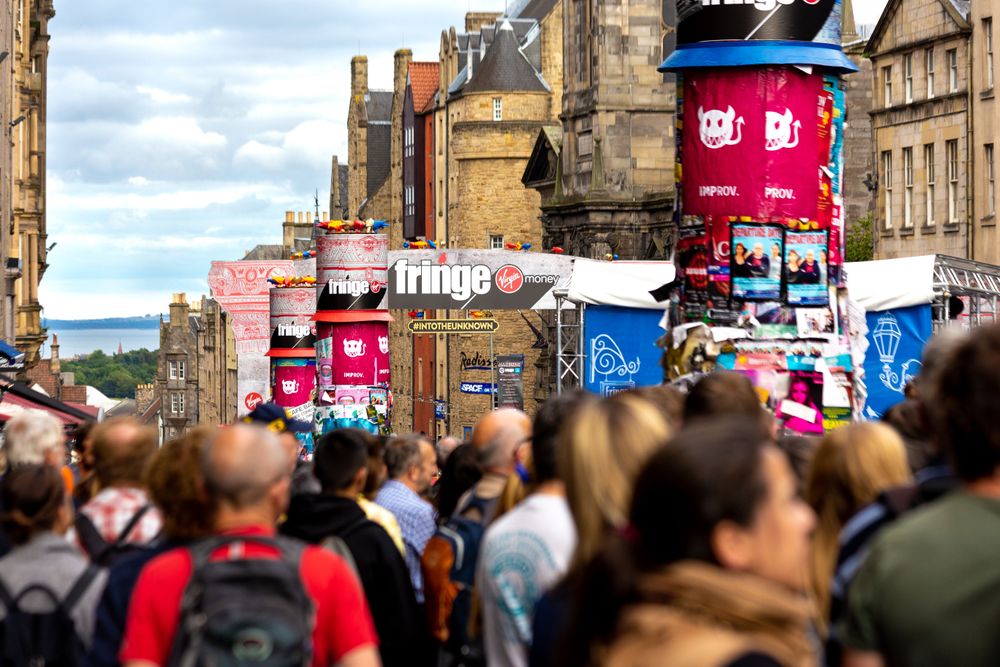 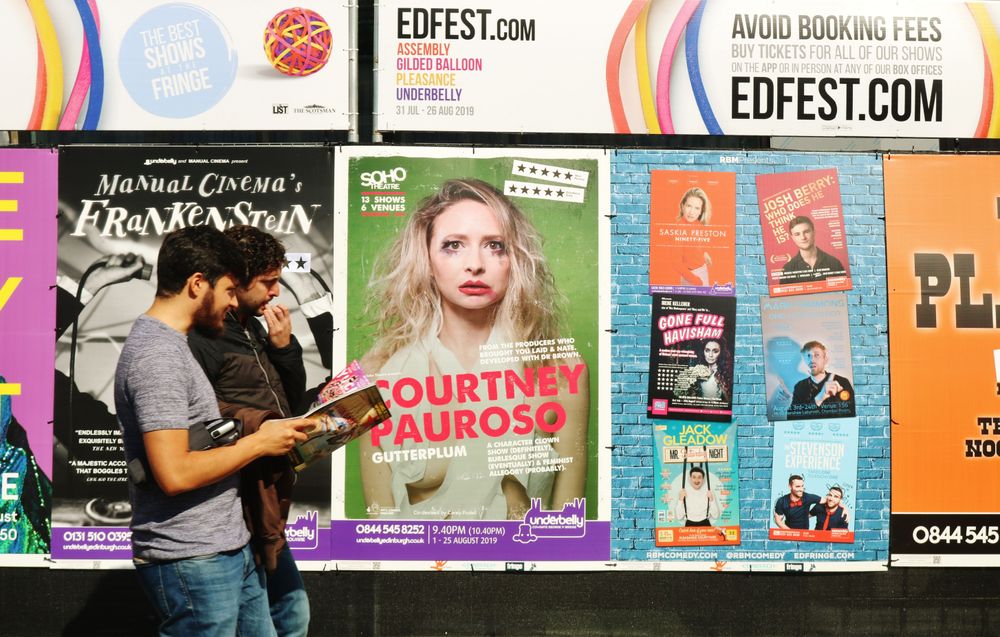 Edinburgh is a beautiful city all year round, with its quaint, cobbled streets, its historic attractions and rich history and culture. It is well-known that this UNESCO world heritage city is a hub for the arts and literature and is home to the famous Fringe Festival. It is no doubt that when the Fringe Festival comes to town and the city is filled with tourists and locals alike, the city comes alive in a whole new way. So, if you want to visit Edinburgh in all its glory and witness some of the most talented performers the UK has to offer, then you know which month to visit! With thousands of shows, hundreds of amazing street performers and, even, some other festivals running alongside the Fringe, it can all get a bit overwhelming. Therefore, we’ve created an Edinburgh Fringe Festival Guide to give you all the best Edinburgh Fringe top tips and answer all of your questions, so that you can make the most of your time at Fringe.

When is Edinburgh Fringe Festival?

Edinburgh Fringe Festival 2022 runs from 5th – 29th August. It always runs for just over 3 weeks in August, covering 4 weekends but the dates do change year to year.

When should I start planning my trip?

As for the shows, the official Fringe programme gets released on the 7th July and it’s completely free (you just have to pay postage if you order it online), so definitely check that out to find out which shows you want to see. With thousands of shows across hundreds of venues, you will want to be selective and choose the ones that really suit you! You can also check what’s on at Edinburgh Festival and book Fringe tickets on their official site. The big shows boasting well-known names will sell out quickly, so you will want to book them as soon as possible but the smaller shows with lesser-known performers are unlikely to sell out.

Is there any way to do Edinburgh Fringe on a budget?

While a trip to Edinburgh during the Fringe Festival is never going to be super cheap, there are definitely ways of keeping costs low while you’re there. One of our favourite things to do in Edinburgh during the fringe is roaming around the stunning, old streets, and particularly the Royal Mile, and watching the free street performers. We would recommend doing this, no matter what your budget, but it’s a great way of soaking up the fun energy the city gives off during this time of year without having to pay a penny.

In terms of shows, we’d suggest you staying clear of big names and return shows, that are likely to cost more than shows by lesser-known performers. However, if you are keen on seeing these, we’d suggest becoming a Fringe Friend so you can get 2 for 1 fringe tickets on participating shows. Lastly, there are usually some special discounts and 2 for 1 offers up for grabs if you ask the right person. When you’re wandering through the streets, you’ll be handed lots of flyers by leafleteers and if you’re lucky, there will be a code on them. If there isn't, then there is no harm in asking the person who gave you the flyer or the receptionist at the ticketing desk.

What’s the best time to go to Edinburgh Fringe Festival?

There is no good or bad time to go to Edinburgh Fringe. With over 3500 shows, there is always something going on. Sometimes the earlier in the festival you go, the more offers and discounts you can get, as they use the offers to entice people to see less well-known shows. However, the later you go, the more you’ll hear about the shows that are really worth seeing. People will be talking about their Fringe highlights and the “ones to watch”, so it’s up to personal preference.

How do you find the best shows on at Edinburgh Fringe Festival?

There are a few ways to find the best shows on at Edinburgh Fringe. Firstly, if you know of any comedians that you know and like, look out for their names. Given that Edinburgh Fringe is the top comedy festival in the country, it’s likely that your favourite comedians have a show on or are looking to test out new material! These might be on the pricier side though. Secondly, look out for return shows. They’ve usually done well the previous year and have come back due to their popularity, which means it’s one that’s probably worth a watch. Having said that, everyone has their own preference and taste when it comes to performances, so we’d say that talk to people, other tourists, locals, leafleteers etc, and they’ll be able to give you their own opinion about whether a show is worth watching or not - usually their reviews are the ones that count! So, if someone tells you about a show and it piques your interest, go for it!

What else is there to do in Edinburgh in August?

There are so many shows on during the Edinburgh Fringe that there is no way that anyone could do everything they wanted to, even if they spent the whole of August in Edinburgh. However, there are so many other things to do around Edinburgh in August outside of the normal tourist attractions too. August is the month with the most festivals in Edinburgh and given that Edinburgh is one of the most well-known festival cities, it’s unsurprising that throughout August, there is also Edinburgh’s International Book Festival, the Edinburgh Art Festival, the Edinburgh International Festival and more! So, there is something to entertain everyone!

Where should I stay during Edinburgh Fringe Festival?

Ok, we might be a little bit biased on this one, but we have our very own easyHotel right in Edinburgh’s New Town, looking at Edinburgh Castle, just a 10-minute walk from the train station and a short walk from the Old Town where most of the Fringe venues are. So if you’re planning a trip to Edinburgh, during the Fringe or not, book our easyHotel Edinburgh to be right in the heart of all the action.

From £43.99 / night
subscribe to our newsletter
The Best Bars & Restaurants in Glasgow

Glasgow is a city that’s loved by foodies, and for good reason. Discover the best places to eat and drink in this beloved Scottish city with our guide.

If you've ever been fascinated about accents and local dialects, then this one's for you. Like other UK accents, Glaswegian has its own unique influences originating from Irish to Gaelic, which is what gives it its distinctive sound and sayings.

How to Spend 48 hours in Glasgow

Glasgow is a cultural hub that’s distinctive and full of character. Famed for its Victorian and art nouveau architecture, the city is full of world-class museums and galleries. Find out what to do in Glasgow in 2 days with our guide.